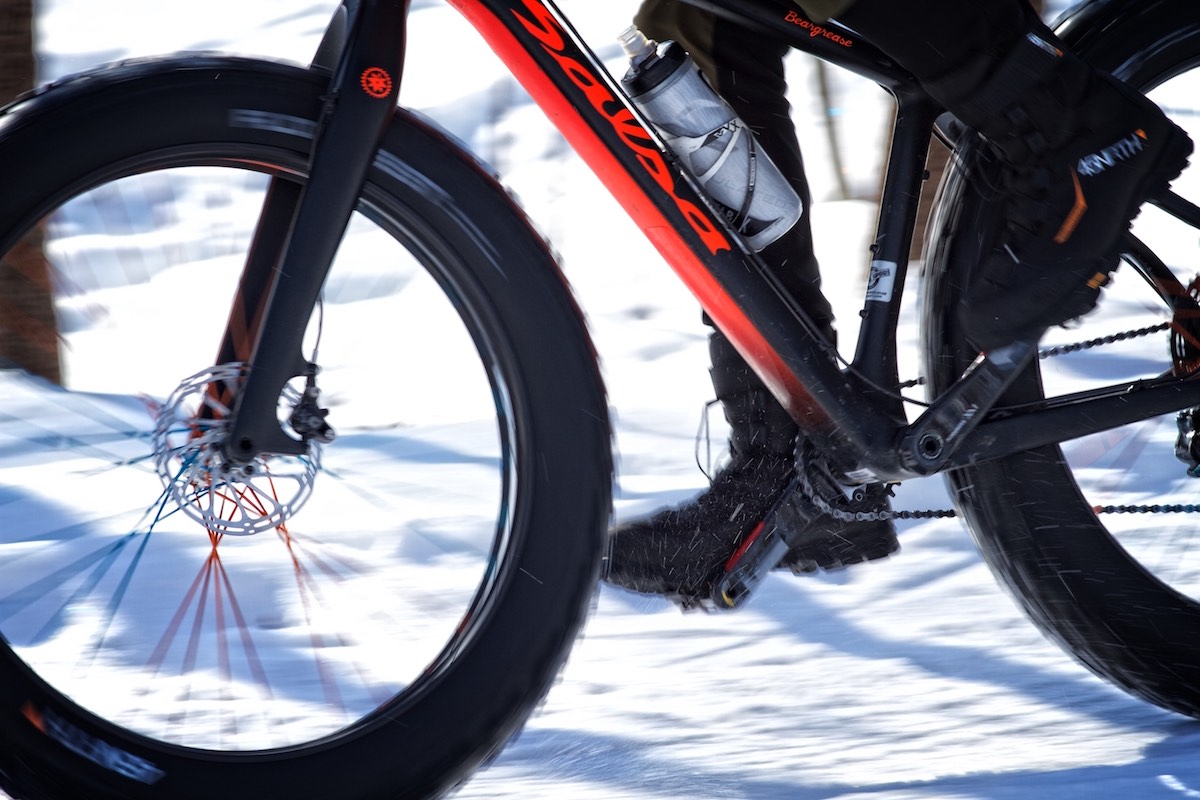 February 14, 2016: Valentine's Day, and the day of the first inaugural Fat Cupid Classic held in Appleton, Wisconsin - the first "fat bike" race held in the area. Sponsored by our friends at the Recyclist Bicycle Company, this was a great opportunity to get some shots of the fat bike racing action.

It was a chilly but sunny winter day, and snow conditions for racing were about as perfect as possible. With trails groomed the action started. 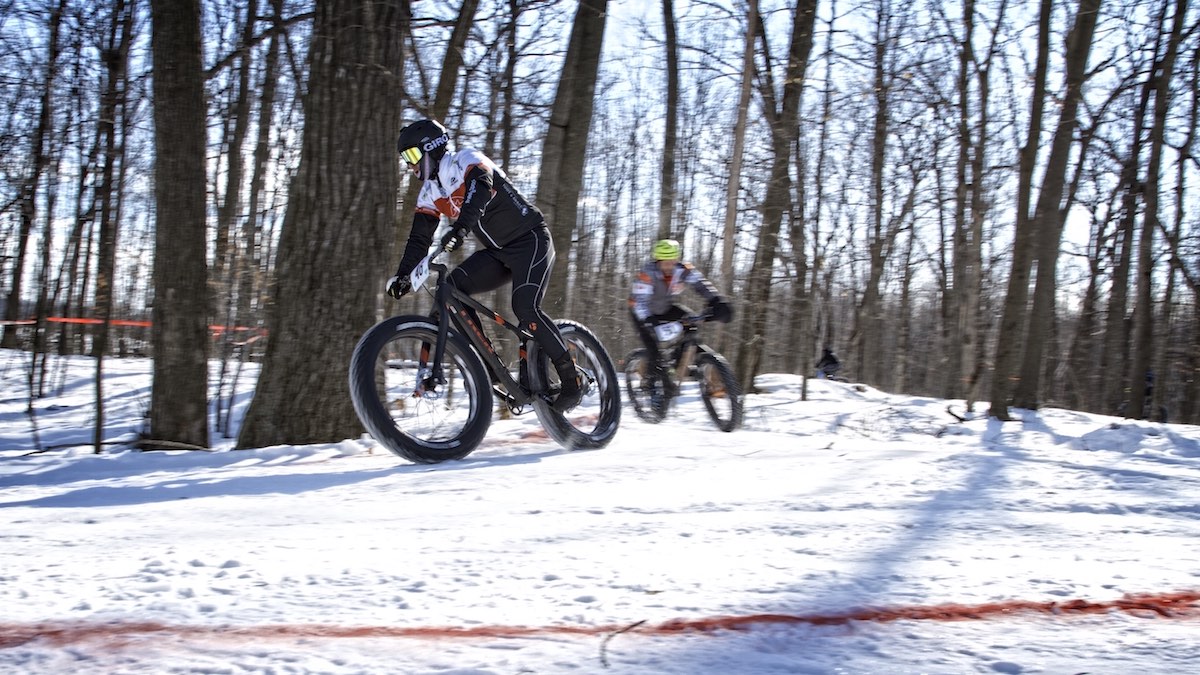 Racers of all ages hit the course on a variety of fat bikes from the likes of Trek, Specialized, Surly and others. 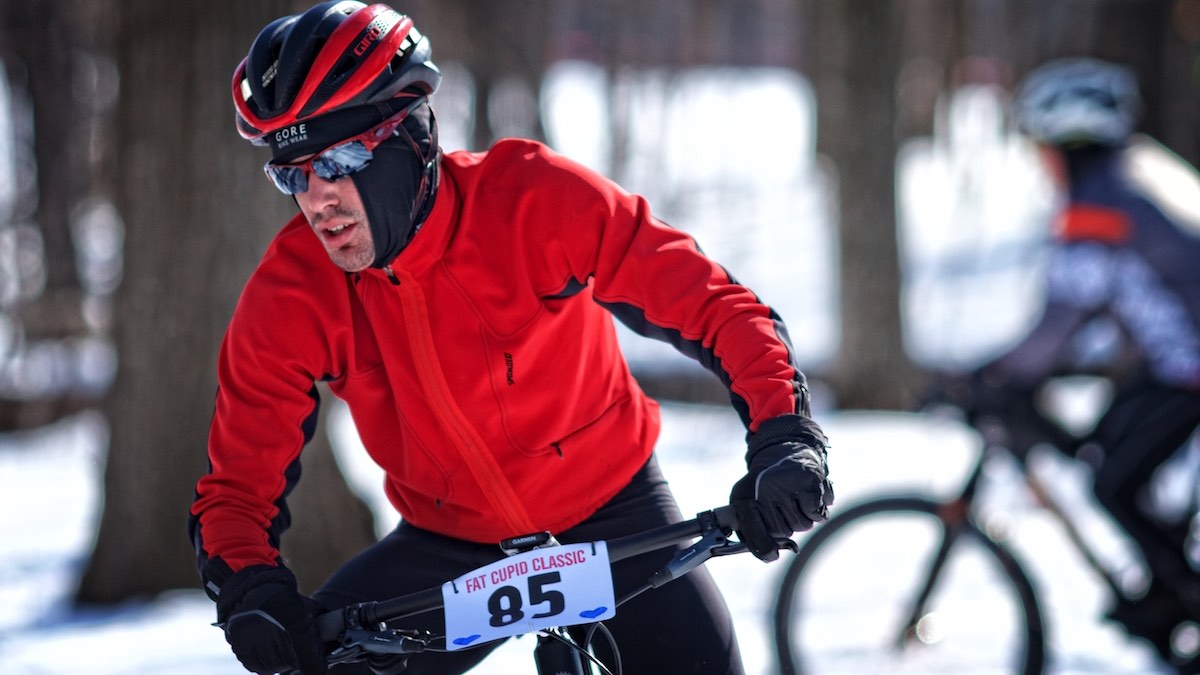 Temperatures were hovering in the low 20s Fahrenheit, much warmer than is sometimes the case in mid-winter in Wisconsin. The weather seemed about right for most racers. 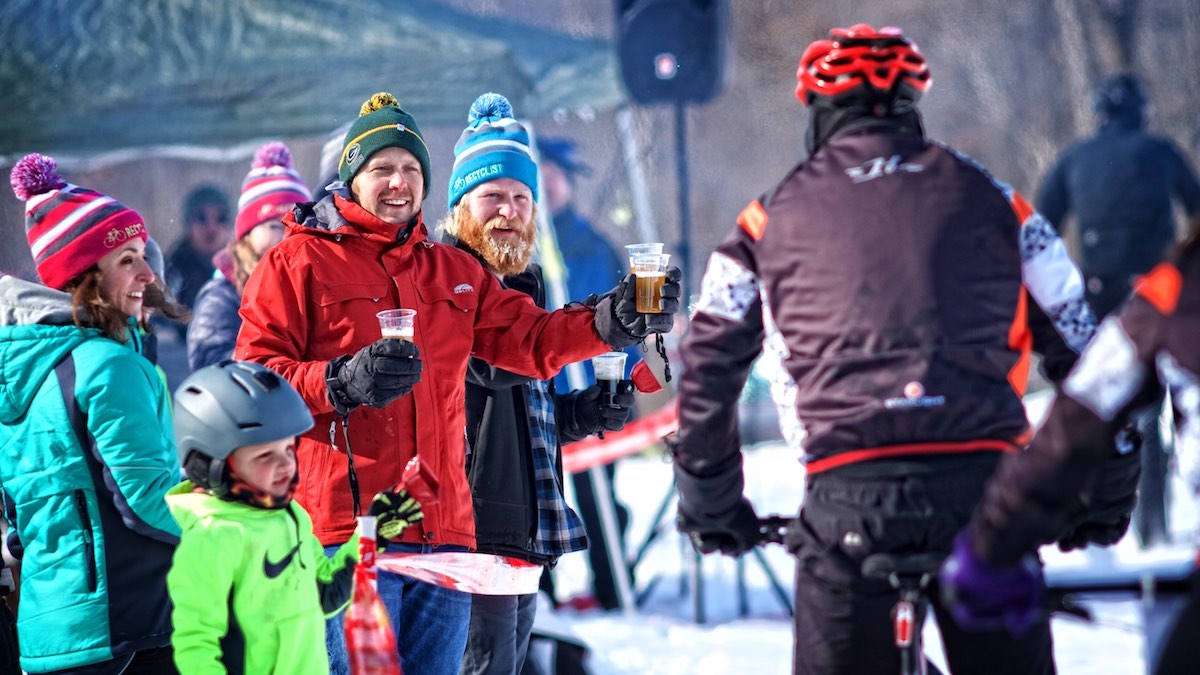 In fact, in good fat-bike style, certain flavorful refreshments were critical in helping the competitors complete the course. This was a scene not likely to be repeated during le Tour de France. 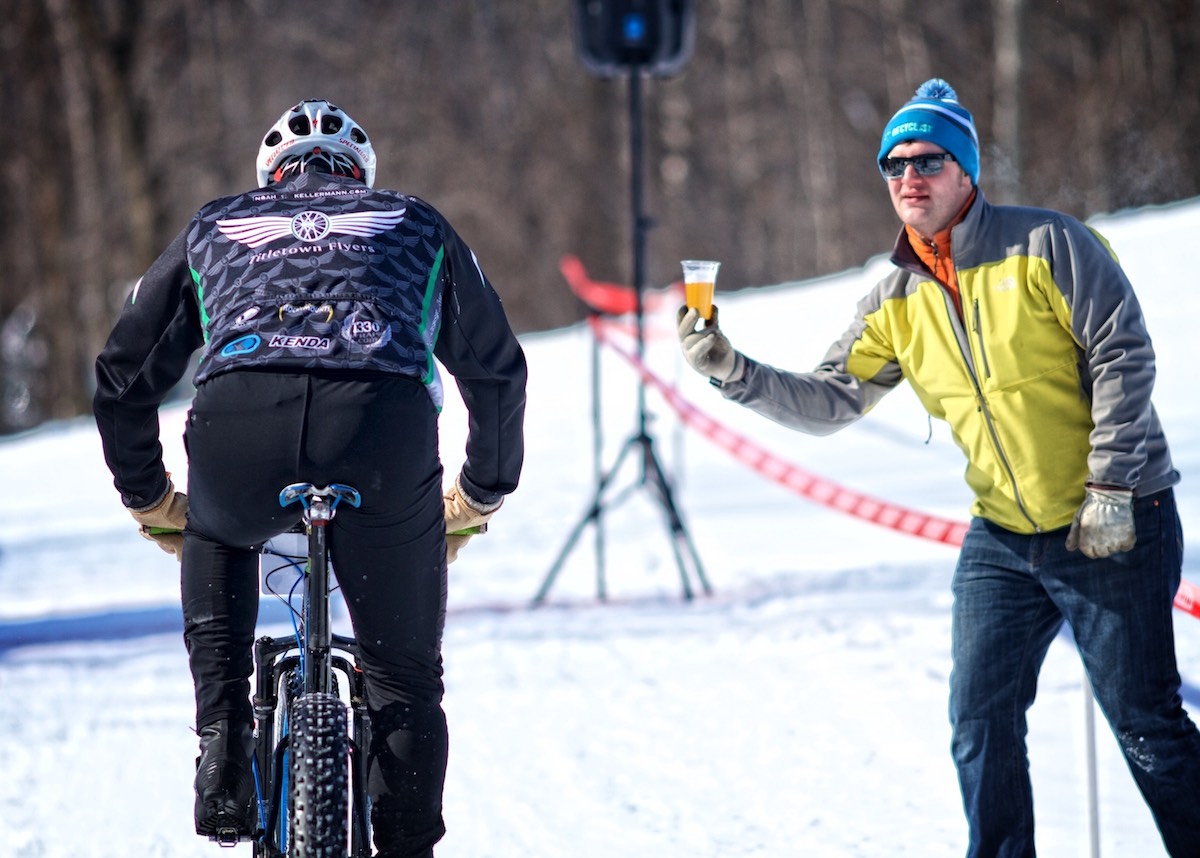 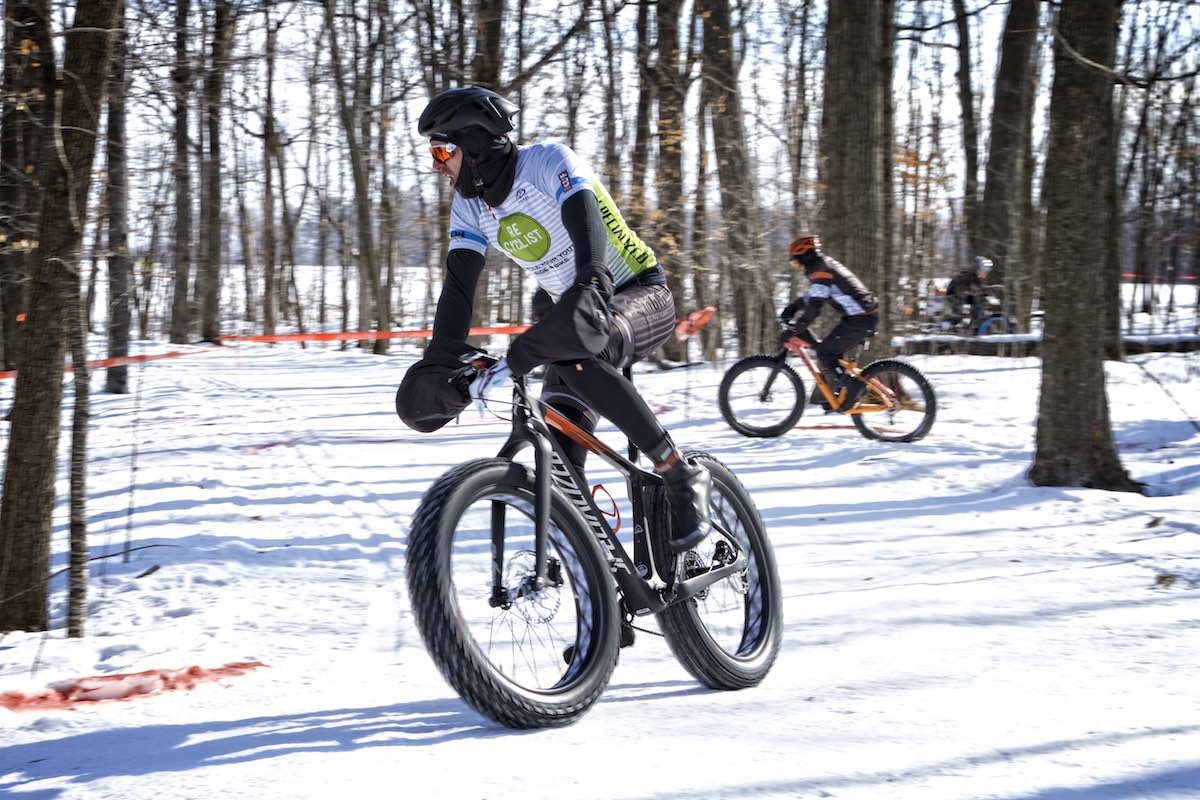 Despite the beer, or perhaps because of it, competition was fierce. Here a racer in Recyclist livery on a Specialized Fatboy rounds a corner. It's counterintuitive, but the Fatboy is actually a relatively lightweight bike, and a nimble one on its big tires.

Another lightweight steed in the race was a Salsa Beargrease. Here, a detail shot of the snow particles flying off the front tire as a racer speeds through the nicely groomed trails of the course.

Among the aluminum and carbon framed high-tech fat bikes, some competitors were running what seemed to be steel frames. Heavier, but durable, steel is in the midst of a bit of a resurgence in the bike building world at the moment. 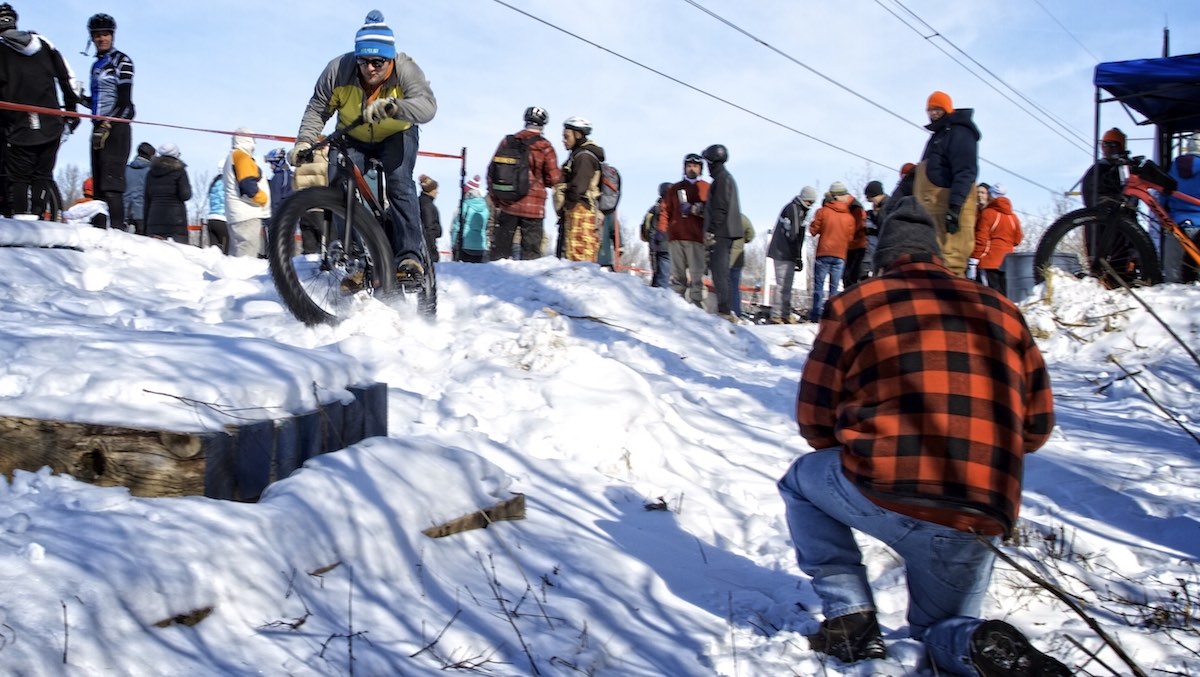 We shot this race both in stills and motion. Above, in a shot captured by Denise, I shoot Matt Fisher landing a jump on his Fatboy with our Canon XF300. You can watch the result, and other highlights from the race, in the video below.

For photography equipment, Denise shot the Canon 7D and mounted both the EF 24-105mm f/4 L lens and the EF 200mm f/2.8 L lens. The 200mm prime is one of Canon's least expensive L-series lenses, but that is primarily because of its old design. Despite this, that lens is one of our favorites. It's light for 200mm, and unlike many other longer L lenses from Canon it is black in color, rather than white, which makes it much more inconspicuous. And, most importantly, it performs at a high level with great sharpness, clarity, and contrast. Meanwhile, the 24-105 remains a consistent workhorse. It's the one lens to use when you absolutely, positively have to get the shot.

As far as camera bodies, the Canon 7D has now been supplanted by the newer Mark II version, which is better in every way. Yet we still chose to shoot this event with the 7D, even though we have the stellar 5D Mark III available as well. The "classic" 7D does really well in many situations, but is particularly well-suited to sports and outdoors. It has consistently reliable autofocus and can shoot at 7 frames per second, which is still decently quick for action. And, the 7D classic is one of the most durable cameras around and was, as usual, completely reliable despite the cold.

As for video, the XF300 has likewise been a workhorse for many shooters even when conditions are less than ideal. During the Fat Cupid Classic, the cold temperatures shortened the battery life a bit, but the camera was able to capture great looking video for a couple of hours at the race.